My Italy experience - By Hannah Byrne

Hannah participated in the Legacy 2020 Project.

“So, when I found out that I had the opportunity to go to Italy the first thing that came out of my mouth was yes! Before I went I was nervous but excited at the same time. I was nervous about meeting the people that were going to be there and it was also my first time going away without my family! But at the same time I was excited because I’ve always wanted to go to Italy!

I was hosted in an Italian family’s house and shared with Irish and German participants. The family showed us around the local area – and even picked fruit off the trees for us! There were people from Hungary, Germany, Spain, Ireland and a lot of Italians involved in the project. I learned about people’s lives, food and work. I also learned that German people learn to swim and speak English at a young age and education is free!

I noticed that Italians love their portion sizes! I was stuffed all the time but the food especially the pizza was so good! Italian’s eat a lot of pasta and bread, they have late dinner at 9pm in the evenings but if an Italian came here they may get sick of potatoes! Both foods, pasta and the bread, are filling and tasty. They also have cake for breakfast instead of over here we have cereal for breakfast. I also noticed that Naples was a lot cheaper than Dublin. The hottest day was 31 degrees it was roasting for September compared to Ireland which was 13 degrees and cloudy when I left!

In Italy we did a number of activities and workshops. We did an ice breaker on the first day it was a great craic. I was in a group with people from Ireland Spain, and Germany – and it was so fun and interesting to learn about people’s lives in different countries! The EU workshop was about European opportunities. I had to concentrate and really listen when the Italian was being translated - but it was interesting. We did some mindfulness too - which was very relaxing.

We did a workshop on recognising and expressing your emotions. This was a way to talk about our emotions and fears – and it helped me to get out of my comfort zone! There was also a workshop about sustainability. We also went to an Italian festival and oh my god the Italians know how to party! It was in a Town called Liveri and was so much fun… On the last day we went to Naples and the project organiser, Cristiano, gave us a tour of Naples and some of the special sites to see. The organiser, Cristiano, was so good – and really helpful!

There was a culture night where Italians showcased their traditional foods as did the Hungarians, German’s and the Spanish. A variety of things including breads, jams, pastas, meats and cheeses were showcased. There were also traditional clothes and music. The Irish brought whiskey, amongst other cultural things, and sang traditional Irish songs (Thanks Mark McQuillan!).

One of the funniest things that happened to me when I was there was that I banged my head off the organizer’s car - because his car was so low. I couldn’t help but start laughing - because it was too funny!

It was so sad to leave everyone because they were so nice. I definitely would go back again! It was an amazing experience. I was so happy to be included in this trip. I had the best time ever - and I hadn’t laughed liked that in a long time!” 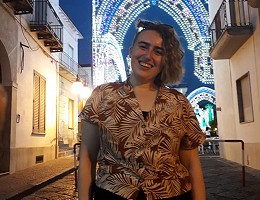 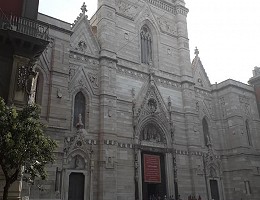 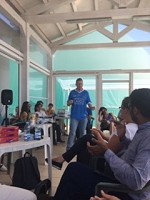 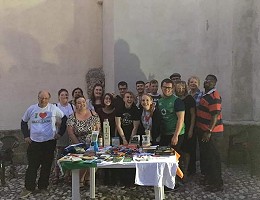 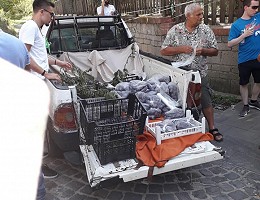 Italian Farmer preparing bags of plums for us.

Please share this page with your friends on your favourite social media sites.

Email a link of this page by clicking
on the button above.